Last weekend a total of 29 senior footballers ran out onto the Gordon TAFE Oval to play off in their first senior GDFL grand final.

Nearly a week later we spare a thought for those who have yet to play in the GDFL’s season decider.

Former AFL premiership player Mark Blake (Winchelsea) headlines the honourable mentions as he hopes to add a GDFL grand final appearance to his local success at GVFL and NTFL level.

Bannockburn’s Jake Myles (Sturt, SANFL) and Winchelsea’s Joshua Carracher (North Ballarat, VFL) have also played at state level but are also yet to have played in a GDFL grand final.

Now it is time to discuss who makes the final cut of “GDFL stars we’d like to see play in their first grand final”: 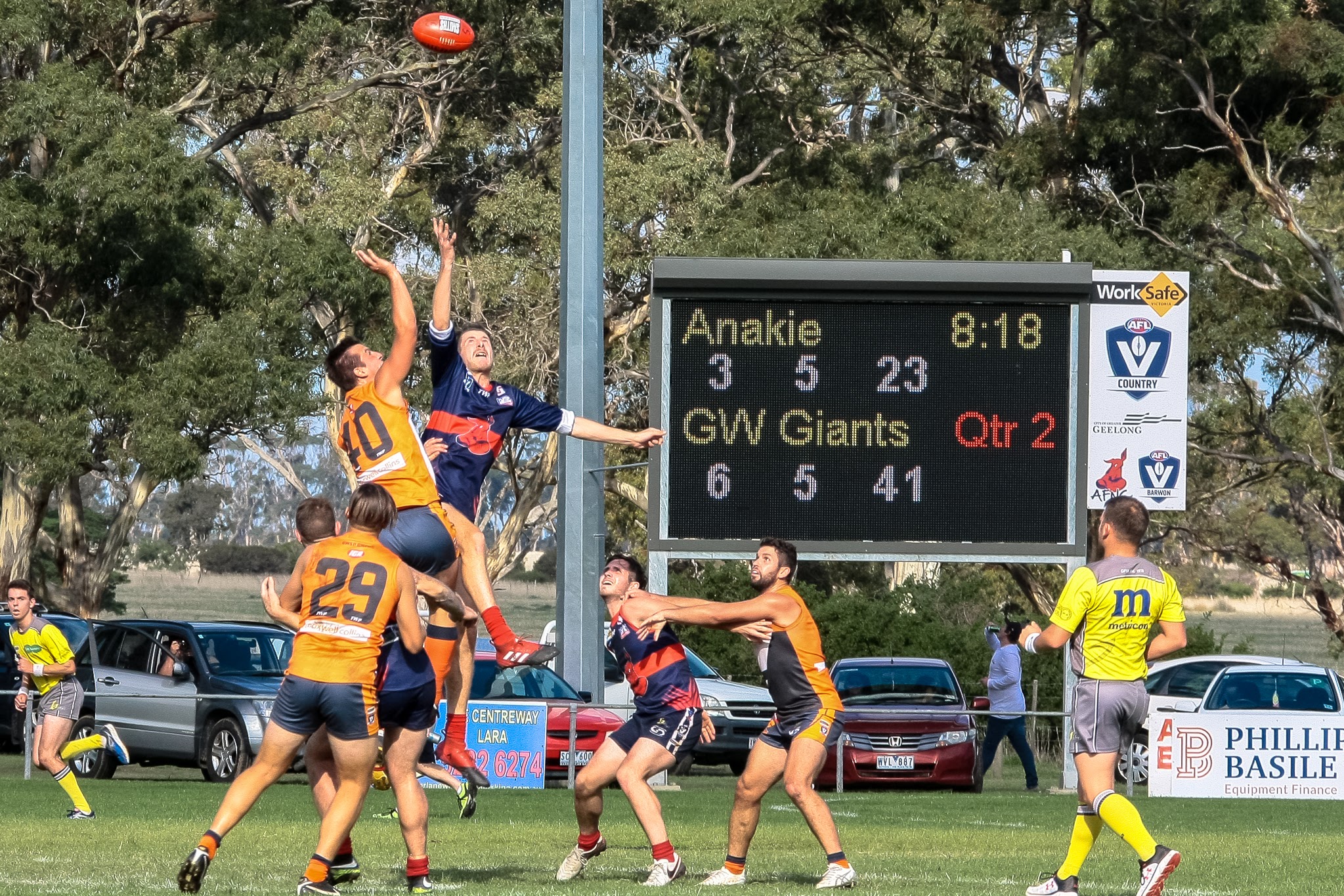 Meanwhile Geelong West captain and his Anakie opponent Luke Wilson had combined for 296 GDFL games before even reaching a single GDFL finals’ series.

Jervies finally made his long awaited debut at the St Albans ground last month and helped guide his side to a short lived lead over the eventual premier Thomson in the semi final.

Though Wilson’s Anakie side now holds the longest GDFL finals drought (dating back to 1998) he proved to be a big game player earlier in the season when winning the best on ground medal in our interleague match.

Both have done enough to deserve a senior grand final appearance. 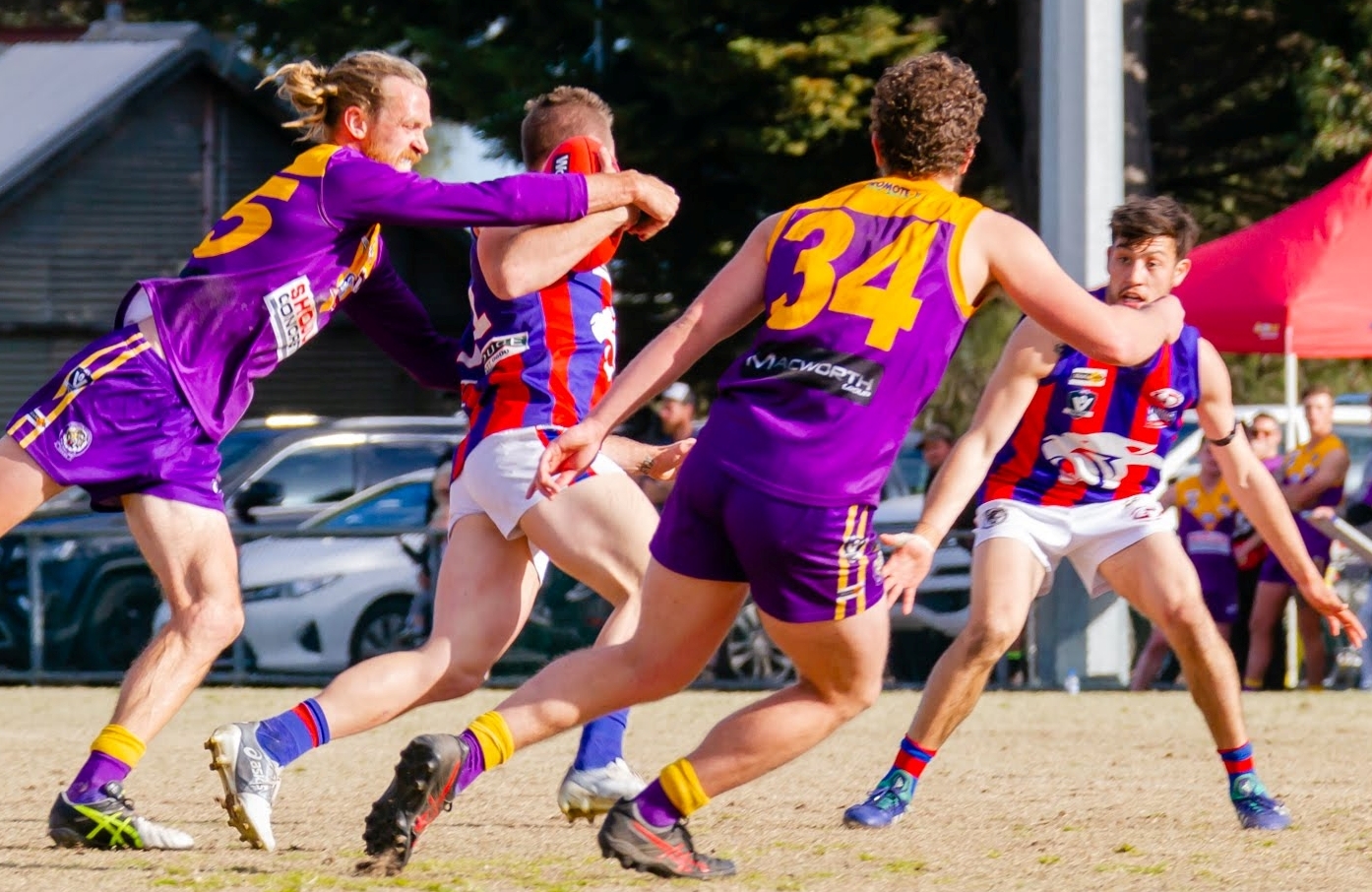 Here we have arguably the hard luck story of season 2018.

Jake Alderding came across from Drysdale at the start of the season having only played one senior game during his tenure in the Bellarine.

The 21-year-old then established himself as one of Thomson’s best players in their preliminary final win over Bell Post Hill for his lockdown on Joel Page.

Sadly, after 13 senior games, he would then be omitted from the grand final side to make way for fellow defender Alexander Denham.

“Jake Alderding kept asking questions for his development, he missed out today and there were other hard luck stories as well,” veteran Adam Wiseman reflected.

Alderding shook hands with club officials on Saturday night promising them that he’ll be ready for the 2019 GDFL grand final. 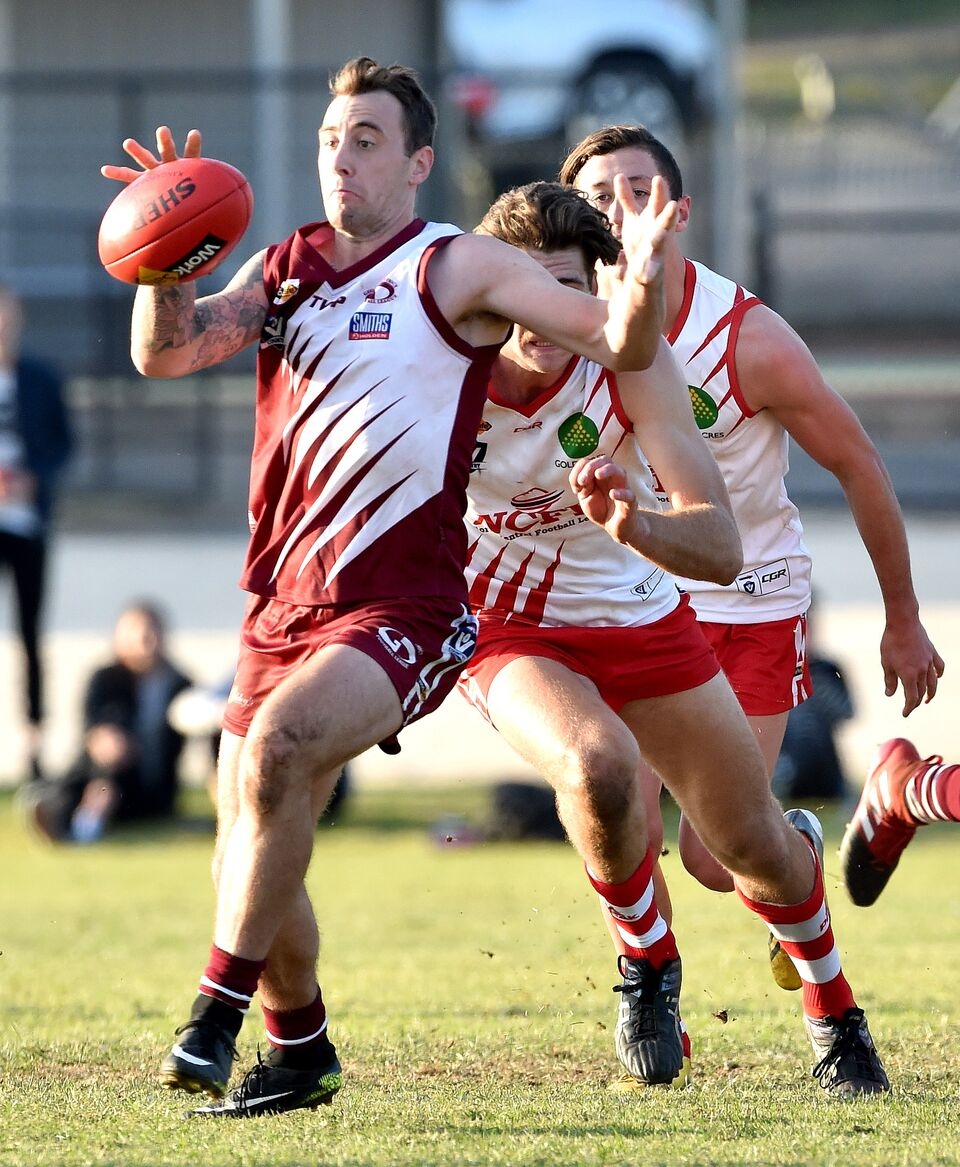 Since crossing over from GFL club North Shore in 2013 Anakie captain Jamie Phillis has been hungry for finals footy.

He’s displayed accuracy with 136 goals from 101 senior games and has proven himself on the big stage with stellar performances for the GDFL interleague sides in 2014 and 2017 (both wins over Heathcote DFNL).

However he needs more cattle to assist him in the midfield so that he may spend more time in 2019 roaming forward.

“He’s (Phillis) a natural forward but due to circumstances he’s had to fill spots in the midfield and other positions as a pinch-hitter for a few years now,” Anakie coach Chris Moore says.

If Anakie can recruit for a finals campaign then Phillis, who turned 29 last week, would be an automatic prediction for the grand final’s best on ground medal. 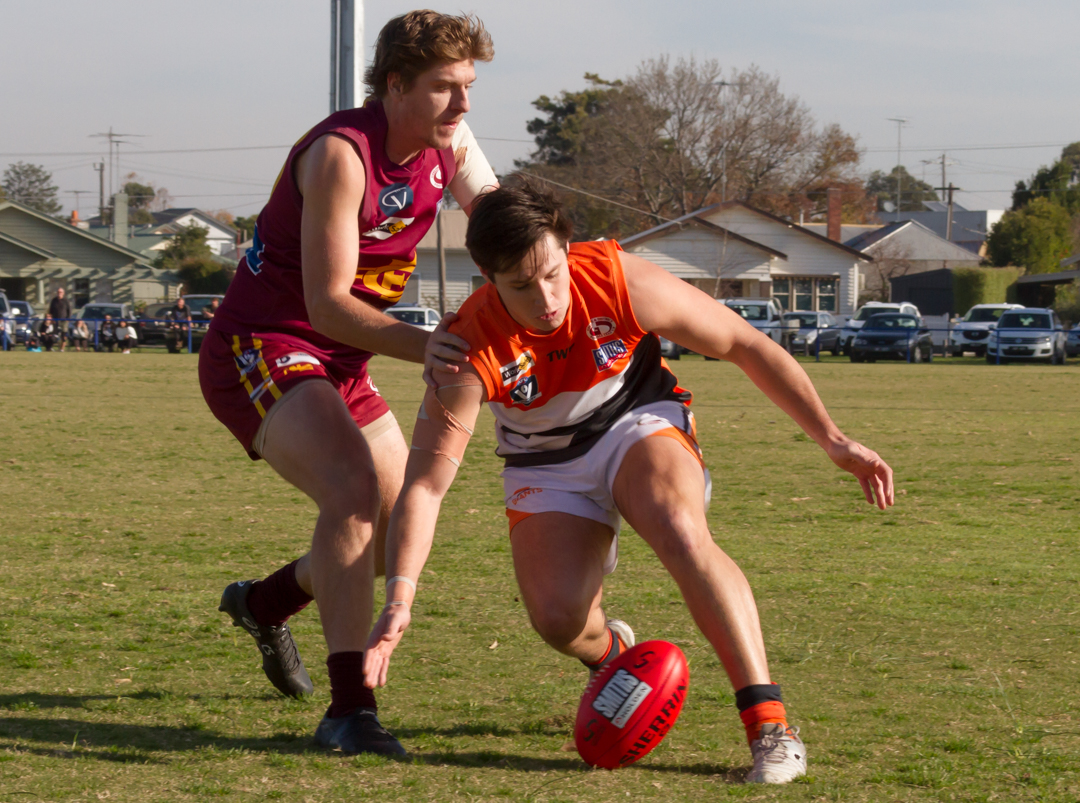 Brayden Mitchell had every right to walkout on his Geelong West outfit after a winless 2016 season.

Yet the (then) first year university student stuck around and guided his side to a long awaited finals series last month.

Similarly to Phillis, Mitchell has shifted between the midfield and forward line and still managed 109 goals from 47 games.

He has also emerged as one of the league’s most reliable targets when selected up forward in the  GDFL team of year from 2017-18.

“Brayden really enjoyed playing interleague so we talked about how now he’s played in that game he needs to come back and stamp his authority,” Geelong West coach Andrew Clark said. 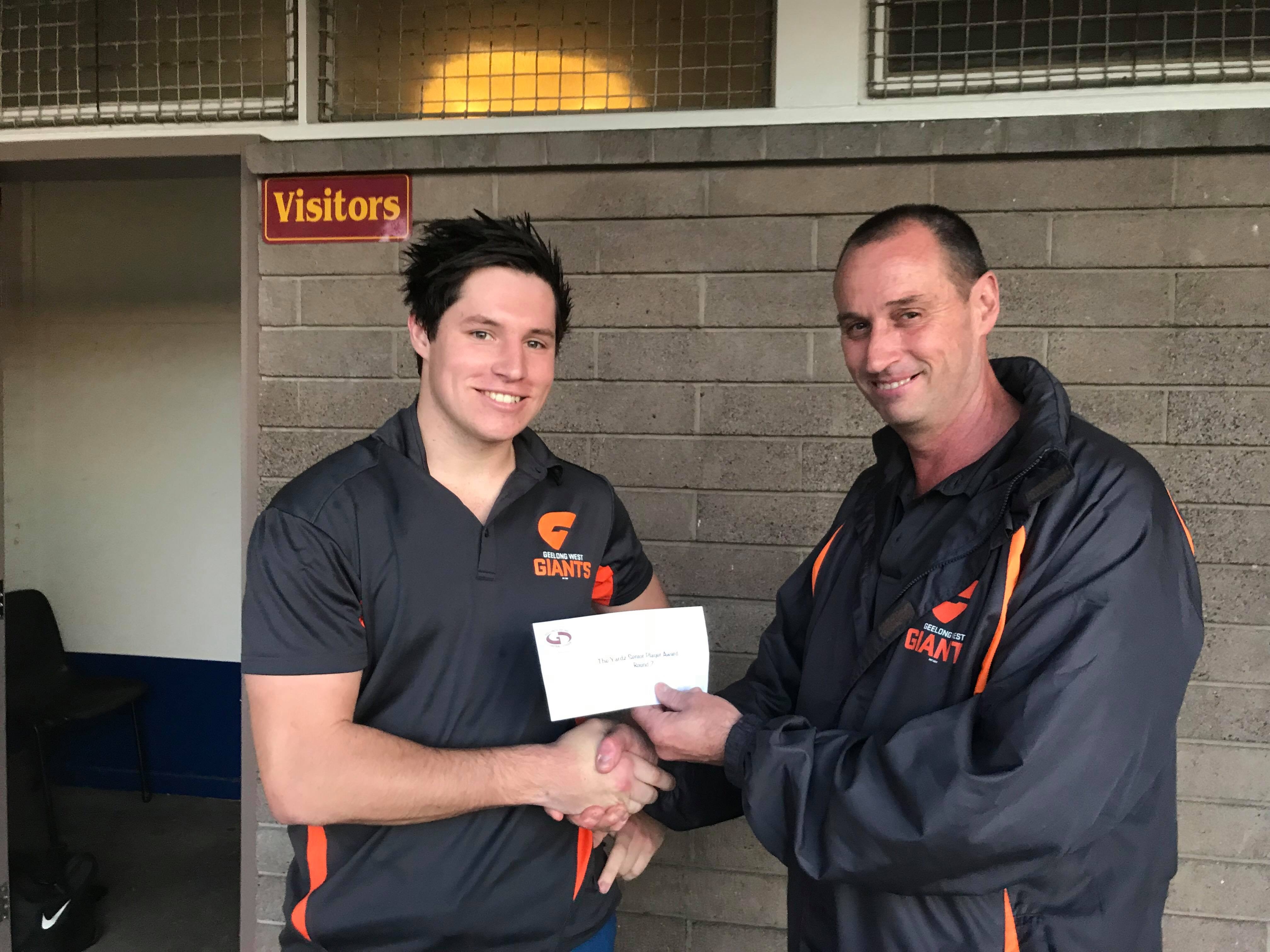 “The first game he came back and landed seven goals.”

Interestingly, Mitchell failed to poll a vote in this year’s Whitley medal nonetheless the 22-year-old could still play havoc to opposing defenders on grand final day…. 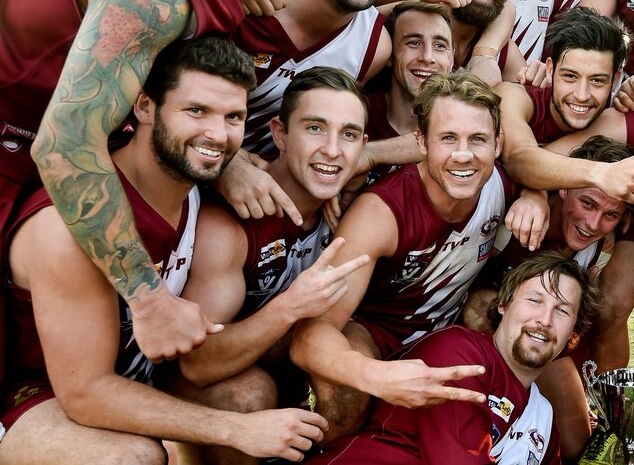 There’s every chance Geelong West would have finished in the top three in 2018 had Justin White’s season been uninterrupted.

The 32-year-old only played 10 games this year and still polled the third most Whitley medal votes (11) for his side before finishing seventh in the Geelong West best and fairest.

One of the most reliable small midfielders in the league White has now featured in two finals series (2016 and 2018) and also typified the ruthless GDFL footballer when donning the Raiders’ colours in both 2016 and 2017. 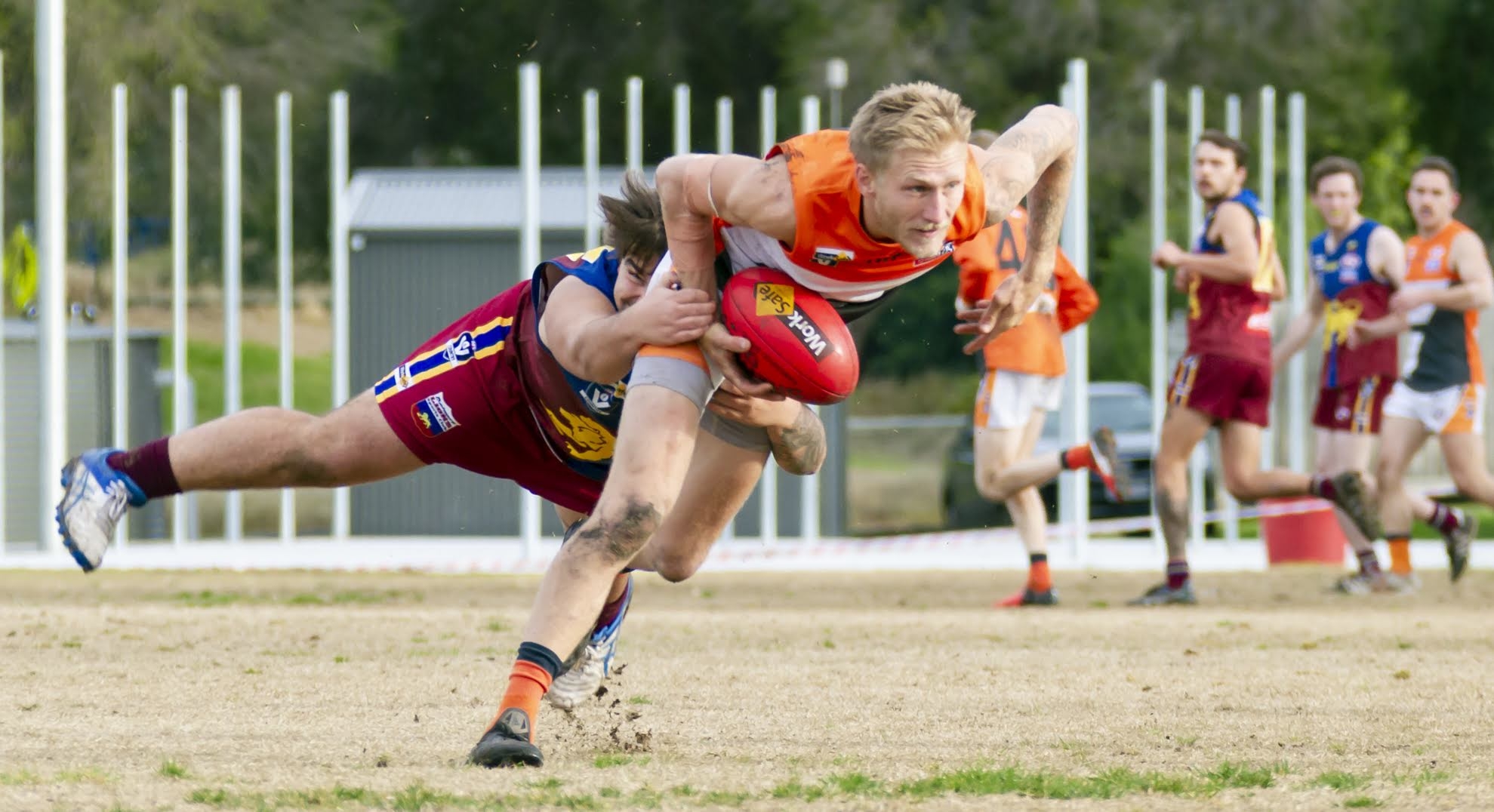 Michael Leamer has proven over the past four years that he can win a game playing just about anywhere on the ground.

For the third straight season the utility has taken out a club best and fairest; this time when representing Geelong West after crossing over from Belmont in October, last year.

Down back he has proven to be a reliable mark, he recorded nine defensive spoils against Bannockburn in the elimination final and can produce a long penetrating kick off the wing.

He also ventured forward against Thomson in the side’s semi-final loss to boot his 100th GDFL goal after 66 games.

Though he’ll be 30 years of age by the 2019 GDFL grand final there’s every chance he’d enter the match as a medal favourite.

Sidelined Thomson ball winner Troy Fenyvesi was terribly unlucky not only to miss out on his side’s premiership but also on GDFL team of the year selection.

Fenyvesi rejuvenated the Tigers’ half forward line this season after crossing over from Bellarine club Modewarre.

His prowess in this department helped guide the Tigers to drought breaking wins over Bell Post Hill and Bannockburn in the opening five rounds.

Though he would not claim a premiership medal, after tearing his meniscus in the Tigers’ semi final win over Geelong West a fortnight earlier, he would still jump on the dais with jubilation.

“I was right next to the boys arm in arm for all of the celebrations so there was no bitterness,” he added.

He then travelled down to Modewarre last year and took out the Bellarine’s Don Cole medal (reserves best and fairest).

We now hope to see him run out in a GDFL senior grand final.

Jackson Smith may not have played in a GDFL final nevertheless the 20-year-old has already achieved some of the highest feats in local footy.

This season the leaping midfielder helped put Werribee back on the map when representing the GDFL in the interleague against Heathcote before he was selected in the team of the year.

He remarkably polled two of his 23 votes against Inverleigh in Round 2 despite missing 70% of the 40-point loss due to an ankle injury.

Prior to the season the teenager had already completed an impressive resume under his father/coach Nick at Southern FNL club Mount Waverley.

“In 2016 he became the first Division 3 player (as far as I’m aware) to be selected in our senior interleague side,” SFNL media manager Will Hunter said.

“This is in an interleague system for us that dates back to 1993 and what made it all the more remarkable was the fact that he was only 17-years-old at the time.”

He then capped off 2016 when Smith guiding the Lions to a drought breaking 67-point premiership victory over Ashwood with an impressive goal from 80m out.

Smith would do enough to take home the Division 2 league best and fairest in 2017 by polling 23 votes ahead of former Carlton & Collingwood player Chris Bryan (22). 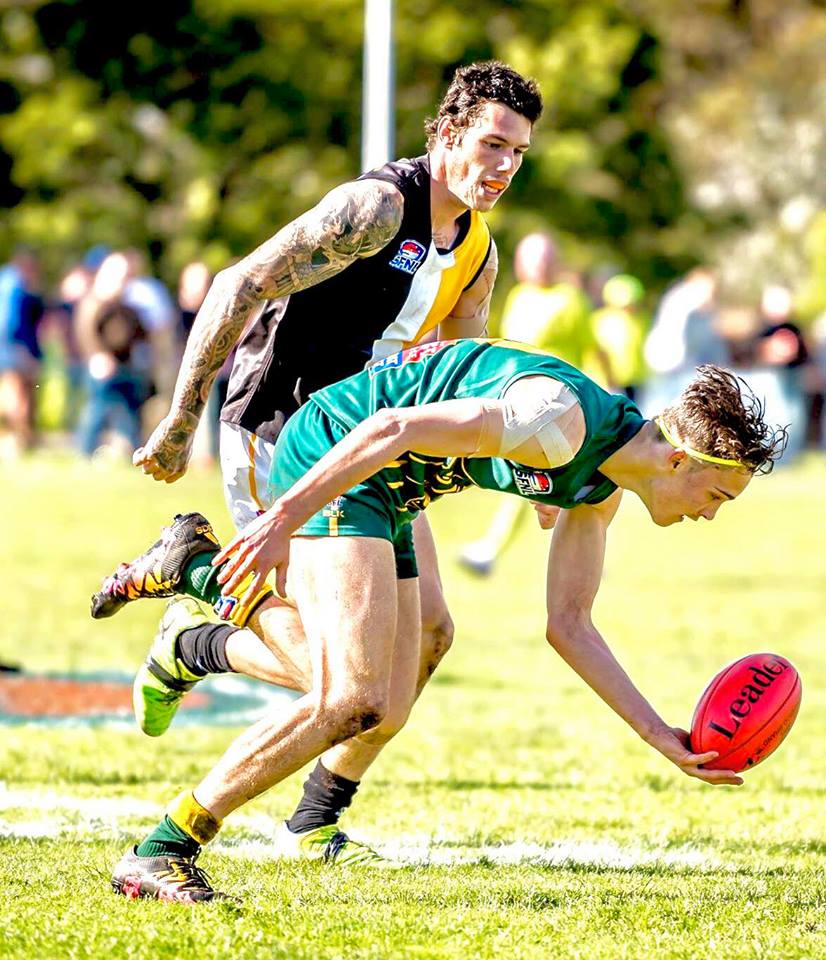 “Just look at the quality of the guys he beat to win that medal,” Hunter added.

“So for this up-and-comer to come out of nowhere and pip the medal makes for the story that writes itself.

While Smith has accepted an invitation to train with Geelong’s VFL side he is also determined to make his debut on the Gordon TAFE Oval.

Winchelsea co-captain Alexander Gubbins appeared bound for a GDFL grand final at the half way mark of the season when his side held an 8-1 record.

By this stage the former VFL defender had collected 18 of his eventual 21 Whitley medal votes for the season.

However it wasn’t to be as the Blues slipped out of the top five in a disappointing second half to the season.

“We had joint captains previously with Byron Mathison and Joshua Carracher so we thought that the duel leadership already worked very well,” coach Brendan Forssman said.

“Clinton Place was a no brainer this year because he’s one of our best trainers and certainly one of our most consistent players as well.”

“Gubbo was a bit more difficult because he only played about six games last year due to injury but we were hoping to get a full year out of him so we thought the leadership might help him.”

He added, “Since that day he’s lead by example and it’s resulted in a fantastic year.”

Gubbins still managed to join teammate Matt Worland in the GDFL team of the year.

This came just days after the 28-year-old dominated his club’s best and fairest count with 95 votes ahead of utility Caleb Brown (67) and teenager Bailey Kahle (49).

Gubbins’ high ranking in this list can be justified by his improvement between the league’s most recent interleague wins over North Central and Heathcote. 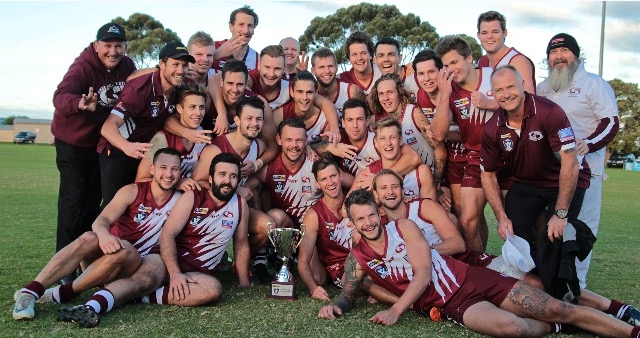 He even made history midseason when polling three Whitley medal votes in his side’s 116-point win over Corio ahead of teammate Mark Blake who landed ten goals that same afternoon.

Gubbins will bring professionalism to his role as grand final captain if the Blues’ are able to reach September next season.

Those who saw Matthew James make his return for Bell Post Hill in this year’s practice match against Winchelsea immediately knew they were in for something special in season 2018.

James capped off a stellar season by taking out the GDFL’s Whitley medal last month.

The 24-year-old was judged best on ground a total of nine times this season to finish with 30 votes ahead of Thomson playing coach Reece Holwell on 25.

Sadly, he would be denied a grand final appearance after his side suffered its first finals exit since 2007 when facing Thomson on preliminary final day.

“Matthew James had fractured ribs since we played Anakie in Round 18 so we risked him in the finals,” coach Brad Martin explained.

“James is our key baller winner who breaks the line so he already received attention and then come finals he was targeted even more.”

“He couldn’t touch his toes by our final week so it felt like we had a nightmare run of injuries.”

Originally a Bell Post Hill junior, James donned the colours of Geelong West St Peters, Bell Park and St Mary’s as a teenager before making his senior debut for North Shore in 2015.

“It was a pretty tough 12-18 month period and it was also pretty tough to watch from the sidelines but I just had to suck it up and I’m here (GDFL) now,” James revealed.

“Last year I tried to stay away from footy because it was getting to me.”

He continued, “I still watched the AFL and on a Saturday night Basher (BPH coach Brad Martin) and some of the other boys would text me to tell me how they went and see how I was going.”

“I guess they felt a bit bad for me but I was over the moon that they won and hopefully I can be a part of one in the coming years; that’s the ultimate aim.”

However the Panthers will first need to get him and fellow recruit Daniel Maher into a grand final before we start the dais discussion.